If you have no idea what I just said, I recommend reading the excellent intuitive explanation of Shapley values in this book. Here, I will outline two points that can be easy to miss in a first reading.

Now for the gory details. What follows assumes a solid understanding of Kernel SHAP. If you are not already familiar with how Kernel SHAP works, I recommend reading section 4.1 in this paper. Below I’ll explain the math for eliminating the constraint on the sum of SHAP values, that is briefly mentioned in the paper but is quite non-trivial.

is the original model to be explained and

is the explanation model. The model

can be any model – linear or logistic regression, random forest, neural network etc.

is a vector of 1’s and 0’s called a coalition. 1’s indicate the presence of the corresponding feature, while 0 indicates the absence.

maps a feature coalition to a feature set on which the model can be evaluated. Let’s dissect this a bit more. A coalition is a feature vector where some features are present and others are missing. How do we calculate the model prediction on an input feature vector when some features in the vector are missing? There are multiple ways to do this – one way is to randomly pick values for the missing features from the training dataset, another is to consider all possible values for the missing features that occur in the training data (full training data or a summarized version of it) and average the model predictions. For example, let’s say your training data consists of

instances. You replace the values of the features for which

, i.e., the “present” or “non-missing” features with the corresponding coalition feature values (and leave the other feature features unchanged) for all

times, but doesn’t require any knowledge of the model’s internal structure. In this case,

is a one-to-many mapping from the coalition under consideration to all training data instances where the missing features have been replaced by the values for the training data. Refer to the implementation of _f_hxz in my Kernel SHAP implementation to see how this works.

is the weight assigned to the coalition

is a linear combination of the shapley values defined as:

This is an over-determined system of equations with

equations (corresponding to each coalition). Expressing the system of equations in matrix form, we want to minimize:

matrix called the “coalition matrix”, where

is the number of coalitions, and

is the number of features. In general,

is a column vector of shapley values.

is a special shapley value that corresponds to the “base case” when all features are turned off. The first column of

corresponds to this base case and is thus a vector of ones (because the base case is part of every coalition).

diagonal matrix of weights calculated as:

is the number of 1’s in the coalition

, and the corresponding equations must be treated in a special way.

Note that elements of

depend only on the number of features in the data and thus can be pre-computed. Plot of the diagonal elements of

for the wine dataset with 11 features is shown below. In this case,

diagonal matrix. As noted above, the first and last values are

, and thus the plot below excludes those values. The plot shows a broad trough with large values on either side. This is because the first and last few coalitions examine the features in relative isolation. The first few coalitions contain mostly zeros and a few ones, and thus consider the effect of the presence of the features corresponding to the ones whereas the last few coalitions contain mostly ones and a few zeros and thus consider the effect of the absence of the features corresponding to the zeros. Such coalitions are more discriminating in evaluating the importance of those features and are given higher weight. For a formal proof of 4 , refer to the supplementary material of the original paper. 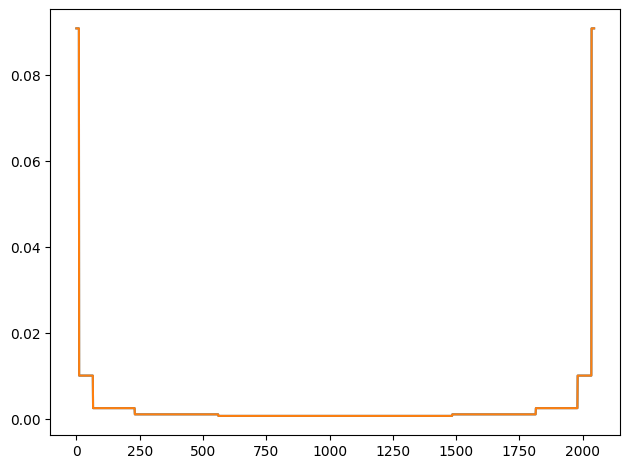 Before we proceed further, let’s consider a simple example to illustrate these ideas. Let’s consider the wine dataset. As shown in the screenshot below, this dataset has 11 predictor variables and 1 target variable (quality).

For simplicity let’s assume our training dataset consists of just the first three predictor variables (fixed acidity, volatile acidity, citric acid) and the 10 rows shown in the figure above. We already have a model trained on this training dataset, and we wish to explain the model’s prediction on row #3: fixed acidity = 11.2, volatile acidity = 0.28 and citric acid = 0.56

Consider first the case of

. This corresponds to the case when all feature values are turned off (for all

(from 2). In the original paper, this is called the “missingness” constraint. Since

in this case is simply the average of the model prediction over the training dataset. Let’s call this

, meaning the expectation of the model prediction

over all training instances.

, the number of features. This corresponds to the case where all feature values are turned on (all

for which we want to explain the model’s prediction (

So the upshot is that our definition of

and imposes a constraint on the other values ( 5)

Let’s consider the case of

. Since the total number of features is 3 (remember we are only considering the first three features), we can easily enumerate all possible combination of features. The feature permutation matrix

How do we calculate

instances. You replace the values of the features for which

, i.e., the “present” or “non-missing” features with the corresponding coalition feature values (and leave the other feature features unchanged) for all

times, but doesn’t require any knowledge of the model’s internal structure. The model could be a linear/logistic regression model, Gradient Boosted Tree, Neural Network..

So now that we have fixed the value of

Let’s now consider the term inside the norm in 3. This term is a column vector of dimension

, with element indices ranging from

. This column vector is a difference of model evaluations on the various feature combinations and the matrix vector product of the coalition matrix and the Shapley values. The first and the last elements of this column vector must be 0 because they correspond to the two constrains we discussed above.  For ease of notation, let’s denote the remaining model evaluations as

element of the coalition matrix. Writing out the non-zero elements of the column vector, we get:

of the coalition matrix by

The minimization in 3 is equivalent to minimizing:

vector of shapley values and

diagonal matrix. This is an overdetermined system of equations whose least squares solution is given by solving: