In this series of posts, I’ll provide the mathematical derivations, implementation details and my own insights for the sensor fusion algorithm described in 1. This paper describes a method to use an Extended Kalman Filter (EKF) to automatically determine the extrinsic calibration between a camera and an IMU. The underlying mathematics however can be used for a variety of applications such as performing sensor fusion between gyro and accelerometer data and using a camera to provide measurement updates to the gyro/accel sensor fusion. I will not be going into the theory behind Kalman filters. There is already a huge volume of publications that describe how Kalman filter work. Here are some references that I found useful.

Most references about Kalman filters that I came across either delve deep into the mathematics without providing a hands-on, practical insight into the operational aspects of the functioning of the filter or describe relatively trivial examples such as a position filter where everything is linear. For the EKF in particular, there are very few examples that illustrate how to calculate the Jacobians, set the covariance matrices and so on.

In this series of posts, we’ll first describe how to perform sensor fusion between accelerometer and gyroscope data and then add camera image measurements in the measurement update step. This problem is interesting to study from a mathematical and implementation standpoint and has numerous useful applications in vehicle navigation, AR/VR systems, object tracking and many others.

Let’s first quickly go over the basics of how a Kalman filter operates. Imagine you are standing at the entrance of a room and are asked to walk along a straight line into the room. This would be a trivial thing to do for most people; however to make things trickier, after you have taken a good look around the room, a blindfold is placed around your eyes. Let’s call the perpendicular distance to the straight line as your “state”. Since you start your journey from the origin of this straight line, your initial state and its “uncertainty” is zero. As you take each tentative step forward, guided by your sense of where the line is without actually being able to see it, the value of the state will change in a random manner. However the uncertainty in your state will always increase as with every step taken, you become increasingly uncertain of your position with respect to the straight line. The amount of increase in the uncertainty depends on the person – small for a tightrope walker and large for an inebriated person. The predict step in the Kalman filter models the act of taking a step in a mathematically precise way by using a set of matrices to model the transition from the current state (distance from the line before taking the step) to the next state (distance after the step is taken) and the amount of uncertainty injected in each step.

Let’s now make these ideas more concrete by putting them in mathematical language. The state

is evolved from the state at

At time ”k” an observation (or measurement)

of the true state is made according to

maps the state vector to the observations, not the other way. This is because the

is typically not invertible, i.e., it doesn’t provide direct visibility on the states.

The state of the filter is represented by two variables:

The filter operates in two steps:

The corresponding equations for the predict and update steps are:

and the system noise characteristics to design the process and measurement noise covariance matrices.

Let’s now consider our specific problem. Our eventual goal is to derive equations 16 and 19 in 1. To keep the math tractable, we’ll first consider a subset of the larger problem, i.e., how to combine the outputs of a gyroscope and accelerometer using a Kalman filter and later add the image measurements.

There exists a whole body of literature related to sensor fusion of inertial data. I will not go into the details here. Refer to DCMDraft2 for an excellent description of the relative strengths of a gyroscope and accelerometer and how to implement a complimentary filter to combine the data from these sensors.

The state vector in equation 16 consists of 21 elements. 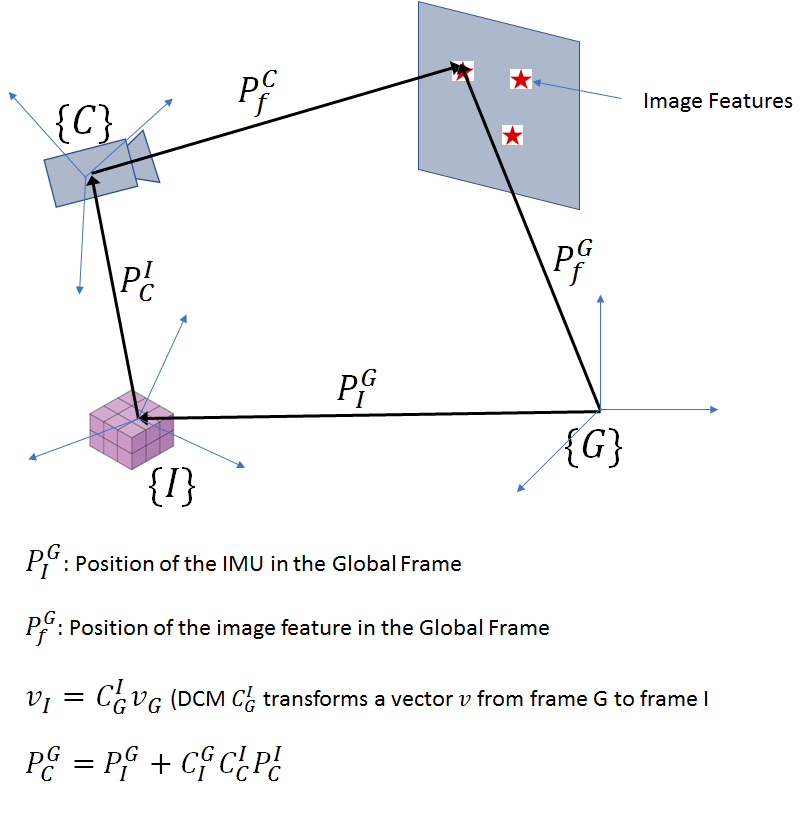 The three coordinate systems – global, IMU and camera frames are shown above. The notation used to describe position vectors and rotation matrices is shown above also. Let’s first consider a simpler problem – integrating the gyro data to produce orientation and using the accelerometer data as measurements to estimate the gyro bias and correct for drift. The state vector for this problem consists of 6 elements – the error in the orientation of the IMU with respect to the global frame of reference and the error in the gyro bias. Note that our state consists of errors in the orientation and gyro bias, not the orientation and the bias themselves. The reason for this choice will soon become clear.

In the discussion to follow, we’ll be evaluating the derivatives of vectors with respect to position and orientation repeatedly, so let’s establish a couple of vector differential calculus equations.

This matrix is useful for us because it can use used to express the effect of a small rotation.

be described by the DCM

and (equivalently) a quaternion

. Let the instantaneous angular velocity of B be given by

. In a small time interval

, where this velocity can be assumed to be constant, the frame B would have rotated by

. Let’s consider using first DCM and then quaternions to represent this new orientation.

Expanding the exponential and using the properties of the skew symmetric matrix results in the well known rodrigues formula:

Note that the multiplication with

above is a post multiplication instead of a pre-multiplication. This is because the small rotation represented by

). Using a pre-multiplication would result in the small rotation applied to the static (non-moving) reference frame.

, the new orientation is given by the quaternion

will be a function of time (unless the body is rotating at a constant angular velocity).

is the identity quaternion. Substituting for

Using properties of quaternion multiplication, this expression can be written as a matrix product:

Note that this solution automatically preserves the unit norm property of the new quaternion:

Also, Using the properties of the

skew symmetric matrix, the quaternion representation can be simplified to:

To avoid singularities associated with division by 0, a Taylor series expansion for

to consolidate these ideas, let us look at some Matlab code to propagate the quaternion using the three methods described above.

with respect to position and small change in orientation. We’ll be using these derivatives repeatedly while formulating the EKF state propagation equations.

derivative with respect to position:

derivative with respect to orientation

The nice thing about these expressions is that they allows us to express the derivatives wrt position and orientaion as matrix multiplications, which is required for the EKF state update and measurement update formulation.

As an example, lets look at some Matlab code that implements the rotation and quaternion based updates.

I have not provided code for utility functions such as dcm to euler angle conversion. Any standard matrix algebra library can be used for implementation.

That is enough to digest for one post! In the next post, we’ll look at the EKF framework for performing gyro-accel sensor fusion.