Most applications of commercial drones today involve aerial photographs as an input. Taking good photos from a moving platform involves a number of challenges, some of which we’ll address in this series of posts. We’ll focus our attention on aerial photographs as an input to photogrammetry applications. Photogrammetry is a technique that uses image feature correspondences to extract the camera and scene geometry and then employs multiview stereo to construct a dense point cloud of the scene depicted in the photos. Photogrammetry is emerging as a disruptive technology in the areas of land surveying and construction site monitoring as it is able to reproduce scene geometry to an accuracy of around a cm which rivals that of laser scanners and is adequate for most surveying and building modeling tasks.

The accuracy of photogrammetry is determined by how well scene features can be resolved through image pixels. High mega pixel, sharp (low noise) pictures have a higher resolution and result in denser, more accurate and less noisy point clouds. However taking sharp pictures from a moving platform can be a challenge. In this series of posts, we’ll discuss how camera parameters such as shutter speed, aperture and ISO can be adjusted dynamically to take good quality pictures.

Let’s first understand how image formation occurs. Imagine what would happen if you were to take out the lens from an analog or digital camera (while leaving the shutter intact). What type of image will you get? It is likely that your image will be completely washed out, looking nothing like the scene in front of the camera. This is because each pixel on the sensor is being hit by light rays from all parts of the scene, and thus the pixel intensity will simply reflect the overall irradiance of the scene.

In order to form images that represent the scene, some mechanism is needed to focus the rays of light so that an image point only receives light from a single point in the scene. The easiest way to do this is to insert an opaque barrier with a small hole between the scene and the image plane. The hole will effectively act as a lens, allowing an image point to only receive light along the line of sight from the image point to the hole. This construction is called a “pinhole camera” 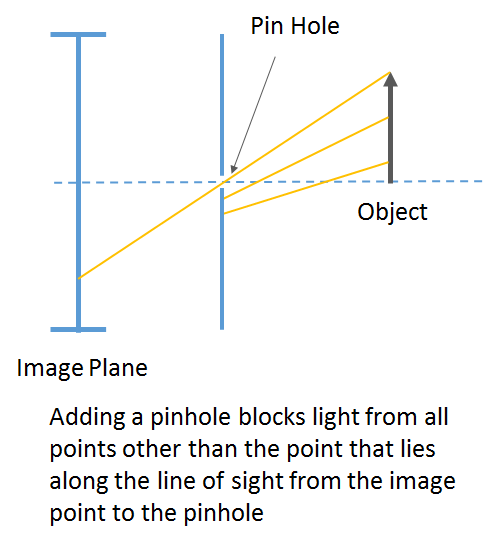 A pin hole camera has two major problems. The first is the trade-off between image sharpness and light collecting power. In order to create sharp images, the pinhole must be infinitesimally small (otherwise each image point will receive light from a pencil of light rays, instead of a single light ray). However a smaller pinhole results in lower overall light energy received by the pinhole image, thereby reducing the intensity of the image. The second is the issue of diffraction. Light bends as it passes by the edge of a narrow aperture. The amount of bending is given by:

is the wavelength and 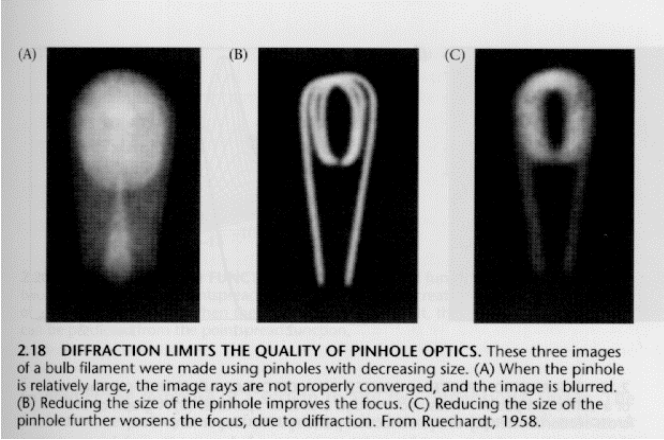 So, clearly, we need a mechanism that allows us to collect more light, without sacrificing the focus quality. This is where lenses come in. 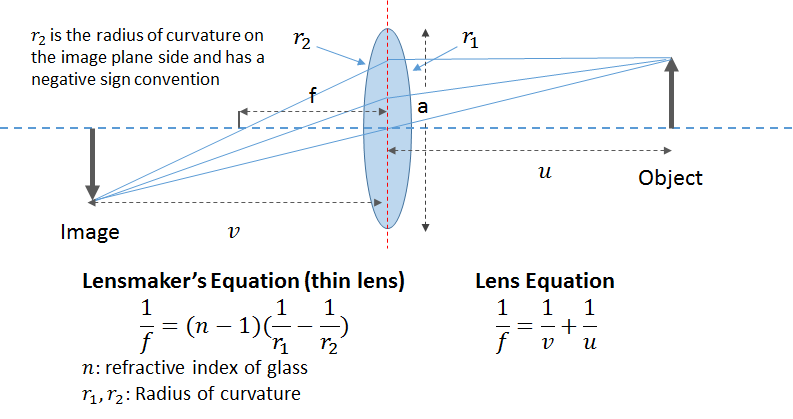 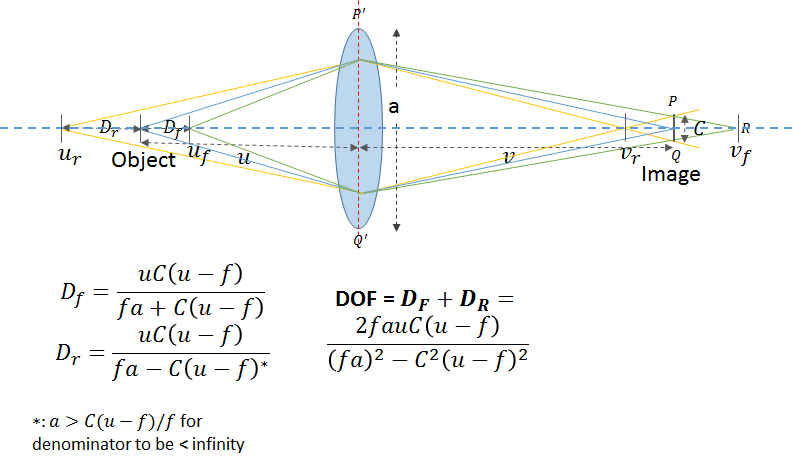 What is a good value of the circle of confusion for a digital camera? Let’s consider the Canon S100, an excellent GPS equipped 12MP camera with a 1/1.7″ sensor. I use this camera extensively for surveys.

Let’s take a look at some real images now.

We can see that as the aperture decreases, the depth of field gets larger (objects farther away appear in focus). Also note that the images with the lower aperture are darker. This is because the shutter speed was set to 1/80 for all three pictures, and as the aperture decreases, less light reaches the sensor, resulting in darker images.
The images above were taken by the Canon S100 camera. I set the camera on manual mode that allows setting both the aperture and shutter speed. I choose a shutter speed of 1/80, which results in pictures with acceptable brightness. The ISO is set to Auto. Note that the expression for DOF above needs u, the distance of the object from the camera. This can be set by putting the camera in the manual focus mode, and then setting the focus to the desired distance. Here’s how this looks like on a Canon S100:

Let’s digress a bit to understand the difference between changing the focus and changing the focal length. This might be obvious to some, but took me a bit to wrap my head around, so I think a discussion would be helpful. In the lens equation shown above, there are two parameters related to the camera that we can modify, the focal length f and v, the distance of the image plane from the camera center. When you change the zoom of the camera, you are modifying f. In most cameras, this is done mechanically by moving the lens elements to change the effective focal length. 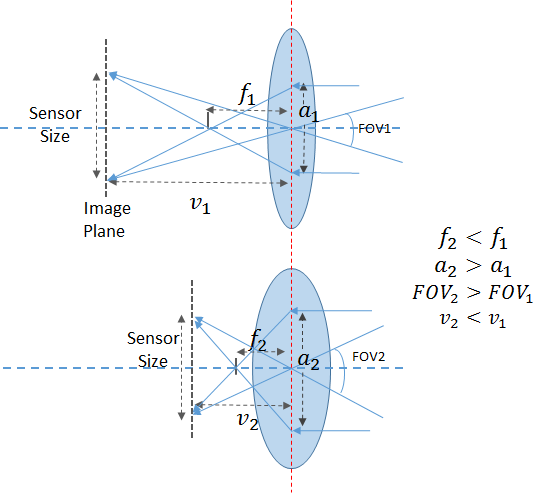 As shown in the figure above, decreasing the focal length increases the field of view (FOV) of the camera. For example, for a Canon S 100,

This is also easily borne out by simple math. From the figure above,

For cameras with a small focal length,

(consider for example, the value of

for a camera with a focal length = 5.2mm focused on an object located 2m away. Applying the lens equation,

, which is almost identical to

Also note from the picture above that for a given sensor size, as the focal length increases, a smaller portion of the lens is exposed to the sensor. This is why as you zoom in (increase the lens focal length), the maximum allowed aperture value decreases.

So what happens when you change the lens focus? I’m not absolutely sure about this, but I suspect that this changes the

by slightly moving the lens backward or forward with respect to the image sensor. Since for a camera with small focal length, the change required in

is very small, this doesn’t effect the calculations shown here.

Incidentally, I have not found a way to read the focus distance anywhere in the image exif tags (for the Canon S100). The closest tag I found is called the “Focus Distance Upper” which appears to be set to a value about twice what I set as the manual focus distance.

As a sanity check, I compared the value of the DOF obtained from the formula shown above with the values reported by the camera.

Consider the Canon S100 with f=13.3mm, aperture = f/8 focused on an object located 23 cm away. Applying the formulas shown above, we get

= 27.1mm which agrees with the values contained in the exif tags.

Variation of DOF with Object Distance

Let’s now consider how the DOF changes as the camera focus is changed. In the previous section, we focused the camera to an object located about 20 cm away. While this scenario served well to illustrate the relationship between the DOF, focal length and aperture, it is not realistic for drone surveys where the camera is focused on a point much farther away.

As expected, the DOF is higher for lower values of camera aperture. This graph is a bit contrived as most cameras limit the maximum value of aperture to f/2, which is about 2.7mm for f = 5.4mm. So we wouldn’t normally see apertures as high as shown in this graph. The reason why we had to consider higher values of aperture was because for

stays finite), which would have made it impractical to plot the DOF. For drone survey purposes,

is what matters, as there are typically no objects in between the drone and scene being surveyed. Therefore, we can conclude that once the object distance is higher than 6m, the field of view stops being a limiting factor for any reasonable focal length and aperture. One can safely set the aperture to whatever makes sense given the shutter speed and ISO. Note however that if you set the aperture too low, diffraction can start becoming an issue.In the next post, we’ll consider the issues of shutter speed and ISO and also look at how CHDK (Canon Hacker Development Kit) can be used to implement intervelometers that automatically adjust the camera settings to optimal values for survey purposes.