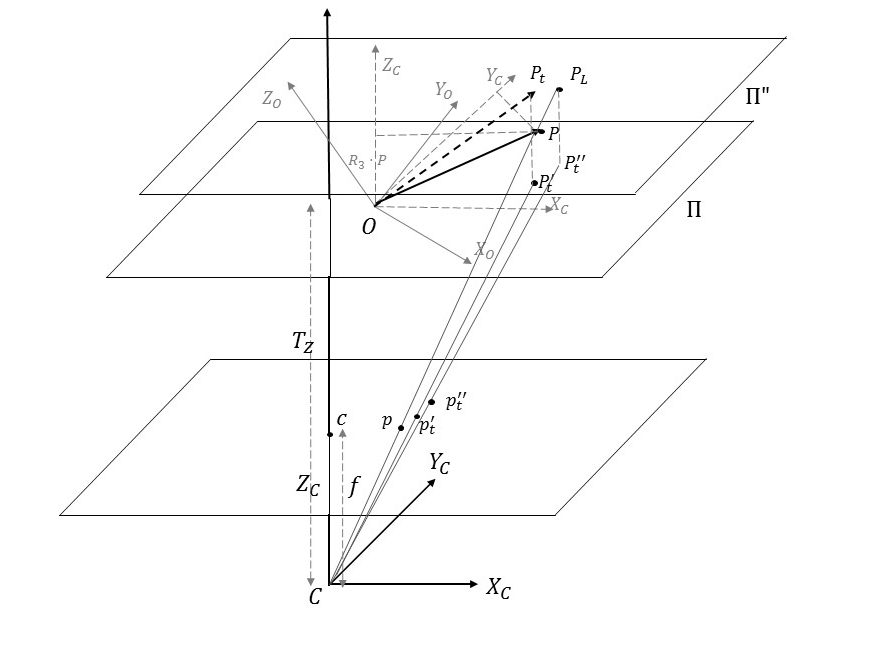 The figure above demonstrates the geometry of the problem. The camera coordinate system is defined by

. The camera center is denoted by

and the image plane is located at a distance of

from the camera center. The center of the image is denoted by

and thus the vector

represents the optical axis of the camera. The object point P is known in the object coordinate system denoted by

shown in the figure. Indeed, from the definition of the rotation matrix, the coordinates of

in the camera coordinate system are

projects to a point

on the image. The coordinates of

are known. Thus, the known quantities in POSIT are:

From these known quantities, we wish to determine the transformation (

) between the camera and the object coordinate system.

appears both in the numerator and denominator. In the denominator, it adds a contribution equal to the projection of

on the optical axis of the camera. Thus, each image coordinate is scaled in proportion to the distance of the corresponding 3D point from the camera. This is a standard feature of perspective projection. However, because

appears both in the numerator and denominator, we can’t write the equation above in a linear form and apply linear algebra techniques to solve for

Dividing the numerator and denominator by

. For object points that are far from the camera and/or lie close to the image plane,

depend on the object point coordinates and the object-camera transformation and are different for each point. Now if somehow we know the values of

for each object point, then we can write the perspective projection equation in a linear format:

on both sides and writing in matrix form,

Now we can solve for

using linear algebra techniques. It is important to understand that because we fixed the

on the plane given by

transformed by this transformation is shown as

in the figure above. Its coordinates in the camera coordinate system are

. From this rotation and translation, we compute new values for the

is the object point index. Now consider equation 5 in [1]. This equation defines the objection function that is minimized in each iteration of POSIT. The objective function is a sum of

). To see this, consider the line of sight through image point

. A point on this line of sight can be represented as

is the image of

lies on this line of sight, but we don’t know the corresponding

can be obtained by setting

. Thus the coordinates of this point of intersection (shown as

. From the definition of the perspective projection, the image coordinates (denoted by

As stated before, the first term in the definition of

corresponds to the scaled orthographic projection of

. Thus at each iteration of POSIT, we compute rotation and translation such that the distance between the scaled orthographic projections and

are minimized in a least square sense. This makes sense as when we have the correct rotation and translation, points

is a measure of how far we are from the correct pose.