In the previous post, we considered the basics of bundle adjustment (BA) and discussed how to obtain the expressions for the jacobian matrices for the case of perspective projection. Let’s now look at these expressions in more detail.

The table below lists the parameters each element of the jacobian matrix depends on. Jx_wx denotes the partial derivative of the x image coordinate wrt to wx.

From this table, we can make the following observations.

The table above shows the variation of the x component of the Jacobian. The y component follows the same pattern with x, y and u, v interchanged.

Verifying the Jacobians are Correct

If you look at the Matlab files containing the implementation of the different elements of the Jacobian matrix (generated by the “matlabFunction” function) you’ll notice that the expressions are very complex. So how to do we know that these expressions are actually correct?

I verified the accuracy of the jacobians by comparing the output of the jacobian function with that calculated manually by numerical differentiation. The code for the variation of Jx_wx is shown below: 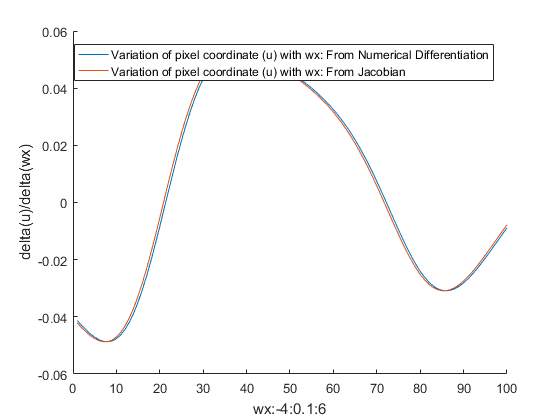 One can see that the derivative from numerical computation is in close agreement with that computed from the jacobian.

As noted in the previous post, we use the axis-angle representation to represent rotations because it is a compact representation and captures the angle and axis of rotation by 3 numbers denoted by

. In the axis-angle representation, the angle of rotation is represented by

represents the unit vector corresponding to the axis of rotation. The axis-angle rotation is superior to the more commonly used euler angle representation as it doesn’t suffer from gimbal lock. The relationship between the two representations is quite non-linear. The graphs below show the variation of yaw, pitch and roll when

We can see that linearly varying one coordinate of the axis-angle representation changes all three euler angles in a highly non-linear way.

Lastly, let’s look at some plots of the variation of some of these Jacobians. 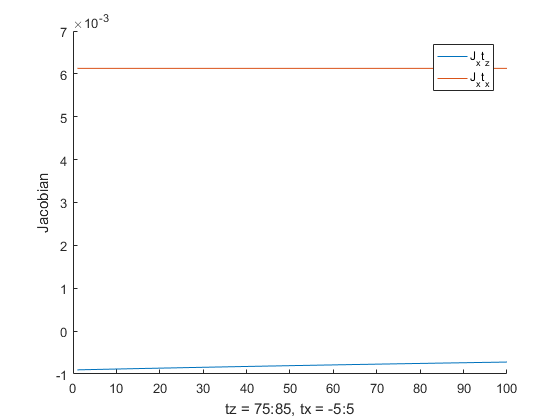 This plot was obtained by varying tx and tz around the mid point values of 0 and 80. The numbers on the x-axis are just array indicies, not parameter values since the x-axis for the two plots represent two different variables – tx and ty. The 3D coordinates of the point under consideration is X, Y, Z = 10, 10, 10. The plot verifies the observations made in the previous post:

The plot below shows the variation of

with the focal length. All other variables are kept constant (

does not change with

and the value of the jacobian is approximately 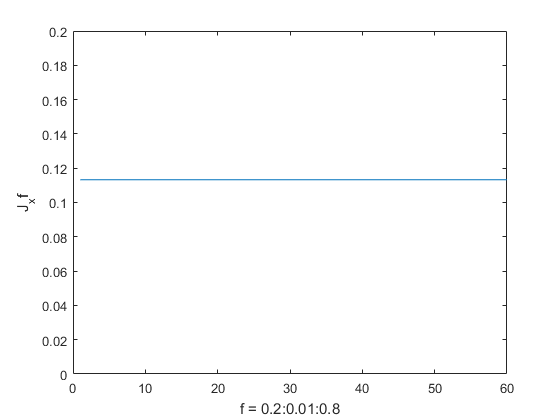 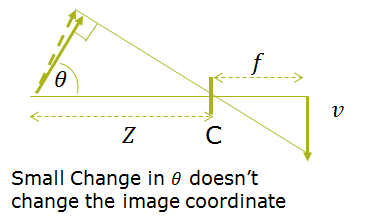