Plotting its shape helps in understanding the properties and behaviour of a function. Unfortunately since we live in a 3D world, we can’t visualize functions of dimensions larger than 3. This means that using conventional visualization techniques, we can’t plot the loss function of Neural Networks (NNs) against the network parameters, which number in the millions for even moderate sized networks.

This NIPS 2018 paper introduces a method that makes it possible to visualize the loss landscape of high dimensional functions. I’ll briefly describe how the method works and refer you to the paper for details.

that minimize a loss function

refers to the input,

refers to the output data label and

is the number of samples in the training batch. This minimization is typically performed using a variant of stochastic gradient descent. Let

denote the final parameter values after training. Since

can have millions of parameters, we can’t visualize the loss function against all the dimensions of

. To visualize a slice of this loss function, we pick two random directions

with the same dimension as

and plot the function

are scalars that vary across a suitable range (such as

axis. The density of the plot is determined by the sampling step size.

An important issue that must be kept in mind while making these plots is scale invariance. As shown below, the output of a network (with ReLU activation function) remains unchanged if we multiply the weights in one layer by a factor and divide the weights of the next layer by the same factor. This means that when the parameters of a networks are perturbed, the perturbation must factor the relative scale of the weights, otherwise a unit norm perturbation will affect a network with smaller magnitude weights more than a network with larger weights, even though the two networks may be equivalent. This will make the first network appear to have a sharper loss landscape, when this apparent sharpness is just a scale artifact. This invariance is even more prominent when batch normalization is used and the output of each layer is shifted and scaled according to the batch statistics. As mentioned in the original batch normalization paper,

, where BN denotes the batch normalization transformation and

are the weights and input for a layer.

The figure below illustrates the issue on a simple two layer fully connected network with the bias factor omitted. Please refer to the original paper for a more detailed explanation. 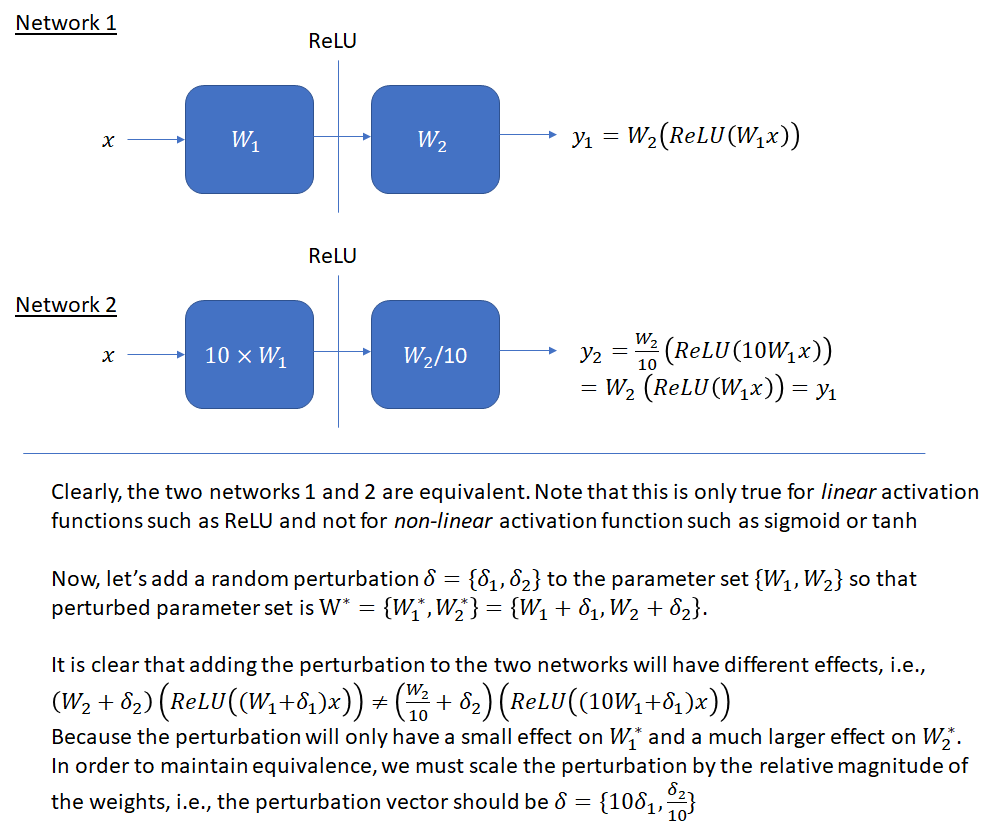 The loss landscape paper makes many other interesting observations – wide vs thin models, impact of network initialization and whether the dramatic dimensionality reduction done by this plotting procedure hides non-convexity that may be present in higher dimensions. The reassuring conclusion is that convex-looking regions in our surface plots do indeed correspond to regions with insignificant negative eigenvalues implying that there are no major non-convex features that the plot missed.