I’ve been thinking of writing about this for a while now, and today being a low wind day at the OBX seems to be good day to do it :-). Around Sep last year, an old work colleague of mine got me into doing 12-16 hour fasts. I’ve been fortunate to be in good health all my life and always maintained a healthy weight, but in the last few years the waist size had been inching up from 30 to 31 and then 32. I have also never believed in diets or calorie counting. My thinking has always been if you eat healthy food and exercise regularly, you’ll be OK. However this colleague of mine had been sending me articles about the wonderful effects of fasting and getting on a low calorie diet in slowing down the effects of aging, cognitive decline and improved energy levels. So finally I decided to try it out.

Given that it’s been nearly a year since I got into this, I don’t remember exactly how the first few weeks of fasting went, but the effects were visible almost immediately. In just a couple of weeks I dropped ~10 pounds, waist size went down to 31 and then to 30 and I felt I had more energy, started sleeping better and felt mentally sharper. A bit to my surprise, a 16 hour fast isn’t quite as crazy as it sounds – if you eat dinner around 8, and eat lunch as your first meal the next day, you’ve done a 16 hour fast. So it essentially means skipping breakfast.

For the first couple of months, I over-indexed (a word I have picked up at Capital One) on the fasting because my colleague had told me that as long as you observe the 16 hour fast, you can eat what you want during your “eating window” and you’ll still get the benefits. But then I realized that ultimately weight loss is calorie-in and calorie-out. The rule of thumb is that it takes an excess of ~3000 calories to gain one pound, which conversely means that one must run a calorie deficit of roughly the same amount to lose an equal amount. One can run a calorie deficit by either eating less or exercising more.

So I started focusing more on watching what I ate rather than on the 16 hour fast. I’ve always been a healthy eater, but would occasionally succumb to a muffin or chocolate croissant. The biggest dietary change I made was to completely eliminate all added sugar, both directly and through food products such as sweetened bread, ice-cream, and yes, even chocolate (big sigh). I also eliminated foods that are easily converted to sugars such as pastas and processed bread. I replaced the pastas with grains such as quinoa and farro, which are more fun to cook and burn much more slowly, providing energy over an extended period instead of creating a blood sugar spike. Over the next few months, my fitness level continually improved, body fat ratio declined and I dropped another waist size (which also necessitated overhauling my wardrobe..)

The keto diet is a big fad these days, the idea being that drastically lowering your carbs intake (~50 grams a day, roughly one medium size bagel) forces the body to produce energy by converting stored fats into ketones (hence “keto-genic”). I never got on a strictly keto diet – though I did reduce my carb consumption significantly and ate more keto friendly foods such as avocado and nuts.

I was a bit concerned that eating less would affect my performance at the gym, specially during strength training. To my surprise, this concern was unfounded and mostly psychological. Prior to starting this diet, I would eat something before going to the gym, to feel “strong”. After the diet, I reversed the order and noticed no difference in performance.

I also started being mindful of the calorie content of what I was eating. I used to munch on bananas, oranges, berries and other fruits like there was no tomorrow, under the presumption that fruits are “good for you”. While that is certainly true, fruits can also pack a decent number of calories and generally contain little to no protein. So I cut down my fruit intake to a more moderate amount. The rule of thumb is one fruit of each kind per day – one banana, orange etc.

My diet is now dominated by: omelet, piece of toast, slice of cheese and one avocado for breakfast, salad (usually from Sweetgreens) for lunch and fish, grains, beans or lentil soup and some kind of vegetable medley for dinner. I also eat low sugar, high protein yogurt mixed with some protein powder after dinner. The only thing I still consume that can have decent amount of sugar is wine, which I will not stop drinking, because life isn’t worth living without wine 🙂

I also got a Fitbit Charge 3 fitness tracker earlier this year, and very happy with it. I wish I had bought one sooner. You wear it on your wrist like a watch and it records your heart rate, steps, calories burnt and sleep cycle. It has several exercise modes such as bike, elliptical, run etc., that capture exercise specific information. If you are exercising outdoors, the fitbit can connect with your smartphone and record distance traveled, speed, elevation change etc., which helps it produce a much more accurate estimate of calories burnt. I highly recommend getting one.

I have noticed that my sleep patterns have improved over the last few months as well. I feel that I sleep better and (perhaps because of that) need less sleep. Fitbit does a great job tracking your sleep cycle – i.e., time spent in REM, deep sleep, light sleep and awake mode. I think it does so by tracking the heart rate. By analyzing the number of hours you slept and portion of time spent in each sleep cycle, it produces a sleep score, which generally agrees quite well with my own assessment of my sleep. For example, sometimes you sleep for just 5 hours, but wake up fully energized, while you are still tired and drowsy even after sleeping for 8 hours.

Another metric I have started following closely is the resting heart rate. A low resting heart rate (RHR) for a healthy person without cardiovascular issues generally means a strong heart and good cardiovascular health. Since getting on the no-sugar diet, my resting heart rate has declined from ~57 to ~53, which is well within the athletic zone for someone my age. I find the RHR to be a great barometer for general level of health and stress on the body as well. When I’m stressed or not sleeping well, the RHR creeps up a few beats and then goes back down once I’m back to normal again. I’ve even found it to be a predictor of impending sickness on one occasion. I caught a mild cold last year and remember the RHR ticking up a day or two before I started noticing symptoms.

Our apartment gym has now been closed for several months due to Covid-19. To get some regular exercise, I’ve significantly increased the frequency and distance of my biking routine. Whereas before Covid-19, I used to bike ~15 miles, 3-4 times a week, I now do 21-25 miles pretty much everyday and 35-40 miles on the weekend. My favorite route is from Rosslyn to Bethesda along the crescent trail, followed by the Mount Vernon trail. Regular biking is such an amazing exercise. I have noticed my legs have become a lot stronger and my whole body feels a lot fitter and well-toned. I feel pretty lucky to live in Rosslyn, within 5 min biking distance from some world class bike trails. 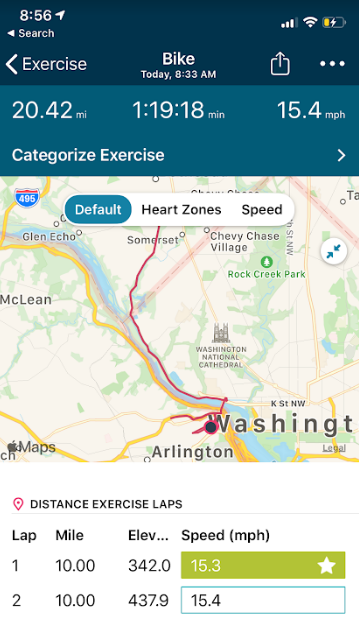 Lastly, not a fan of posting shirtless selfies, but what would a post about dieting be without one.. 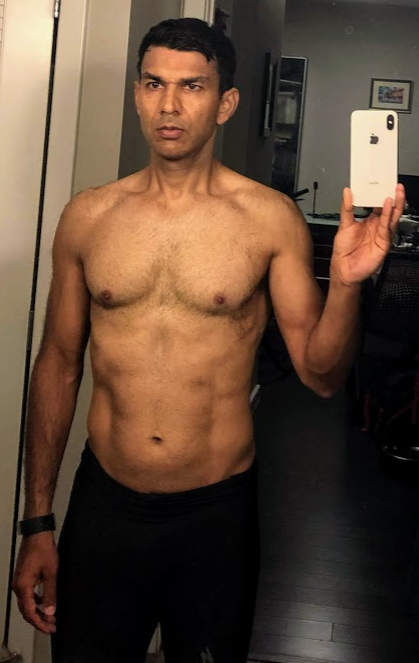