This post shows how to set up a local Ray cluster consisting of several Ubuntu workstations connected over a home WiFi network and running a Directed Acyclic Graph (DAG) of computations on this cluster. The DAG comprises loading a CSV file from AWS S3, performing simple data transformations steps, training a RandomForest classifier, running various implementations of KernelSHAP, an interpretability algorithm on the predictions of the RandomForest model and comparing the results. This DAG is simple enough to follow along easily, but shows the essential elements of real DAGs encountered in practice.

You will also learn how to use the Ray dashboard to visualize your cluster and performance impact of adding additional worker processes on the master and worker nodes.

In later posts, I’ll cover running this system on the cloud, eg., on a cluster of AWS EC2 nodes.

I will not be going into the details of Ray. See this whitepaper for an introduction to Ray’s system architecture and programming concepts. I will also not be going into details on Shapley values and KernelSHAP (an algorithm used to calculate Shapley values). Very briefly, SHAP (SHapley Additive exPlanations) is a class of interpretability/explanability algorithms used to explain a Machine Learning (ML) model’s predictions; for example, by assigning scores to the predictor variables of a ML model which reflect the importance of each variable in making a certain prediction. I refer you to this book for learning more about interpretability in ML and my earlier post about the KernelSHAP algorithm.

The topics I will cover in this post are:

All the code for this project is here.

The dataset we’ll use is the wine quality dataset. This dataset consists of 12 columns. The first 11 are characteristics of wine and the last column is a wine quality indicator. We’ll split the dataset into train and test subsets and train a Random Forest model on the training set. Then we’ll use the trained model to make wine quality predictions on the test subset and calculate Shap values for each prediction using different implementations of the KernelSHAP algorithm. These Shap values indicate the importance of each predictor variable in arriving at a certain prediction.

The first few rows of the dataset are shown below.

The application is structured as shown below.

The figure below shows the application DAG. The main tasks in the DAG are: 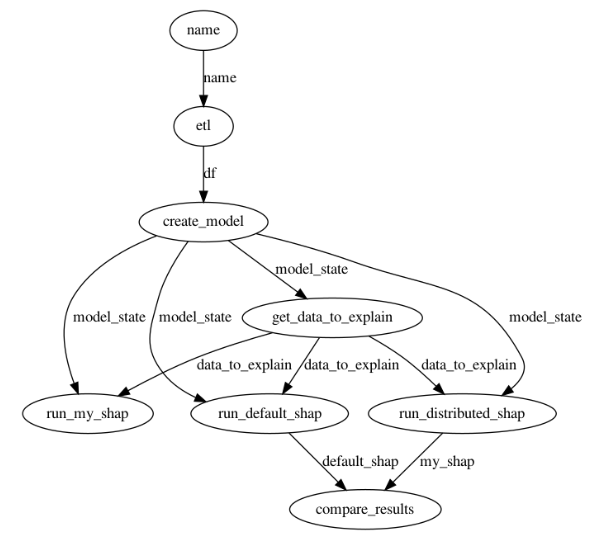 The code below shows how the DAG shown above is created in Python.

Clone the application repo and run python source/kernel_shap_test_ray.py. You’ll need to have Ray and Python packages listed in requirements.txt installed on your computer. By default, the application sets up a local Ray cluster using 6 CPUs and runs the DAG on this cluster. The cluster is automatically torn down at exit.

By default, Ray will parallelize its workload and run tasks on multiple processes and multiple nodes. If you want to debug (eg., set breakpoints in Pycharm), set use_local_mode=1. Doing so initializes Ray with local_mode=True. This forces all Ray functions to occur on a single process.

Be default, the input data file (winequality-red.csv) is read from the disk. Later, I’ll show how to read this file from a S3 bucket.

To run kernel_shap_test_ray.py on an existing cluster, set local=0.

To set up a distributed cluster, we need to build a docker container image consisting of Ray and our application source and data and then run Ray from this container. Below, I’ll show how to set this up.

Note the use of docker volume mapping in the docker run command. By mapping the application source directory, you can make changes to your driver program without building the docker container.

To build the application docker image and run Ray on the workers, create a workers.txt file containing the IP addresses of your worker nodes. You must also create a SSH keypair and copy the public key to the workers so that the script can ssh into the workers and run commands. Here’s a great article that shows how to set this up.

The code to read the worker IP addresses, ssh into each worker node and call update_worker_node is shown below. The logic is hopefully easy to follow.

If you don’t have worker nodes and just want to set up a Ray cluster on your main computer, simply create an empty workers.txt file.

Once your cluster is set up, run:

You can monitor the progress of your DAG execution using the Ray dashboard (the port may be different in your case). As you can see, 3 processes on the master node and 8 processes on the worker node are being used. These values correspond to the NUM_CPUS and NUM_CPUS_WORKERS variables in the setup_docker.sh script.

The table below shows the execution time with increasing number of CPUs.

From this table, we can make the following observations.

You may have noticed that the copy_data script copies the winequality-red.csv file to the worker nodes. This must be done because we don’t have control over which node the ETL task will run and thus all nodes must have a copy of the application data. A better way to manage data is to upload application data to the cloud and provide the credentials necessary to access this data to the master and worker processes.

I pushed the winequality-red.csv to a S3 bucket named my-shap and then created a bucket access policy that allows Get/Put/DeleteObject operations on this bucket. 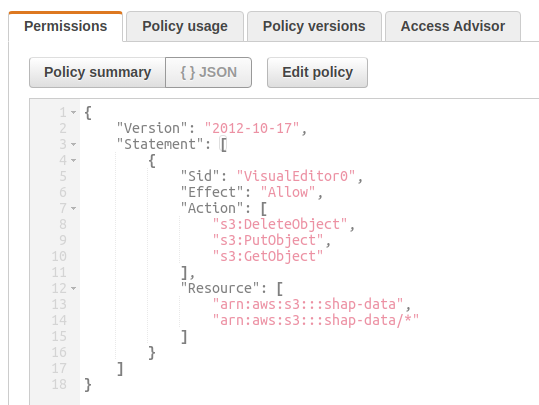 I then created an IAM role and attached this policy to that role. I also added my dev user profile as a trusted relationship in the role. Now my dev profile can assume this IAM role to get temporary STS credentials which can be used to make Boto calls to access the contents of the S3 bucket. If you are unfamiliar with these concepts, I encourage you to search for AWS IAM and read about Policies, Roles, Trust Relationships and other Identity and Access Management (IAM) concepts.

The diagram below shows how the IAM role and your AWS user profile credentials are used to get temporary access credentials and passed to the application docker container as environment variables.

To read data from S3, you should create an iamroles.txt file in the project root folder and populate it with the IAM role ARN. Now when you run setup_docker.sh shell script, it should create an env.list file with the temporary credentials that will be passed to the docker container as environment variables. Any application running in the container can then make Boto calls using these credentials. To read the csv file from S3, just set the use_s3 flag to 1 when running the kernel_shap_test_ray application.

To conclude, Ray appears to be a promising distributed computing framework that makes it possible to utilize both within-task and across-task parallelism by running a DAG on a distributed compute cluster. At a first glance, Ray offers more programmatic control than other similar systems such as DASK for running embarrassingly parallel workloads (which constitute the vast majority of use-cases encountered in practice) while also offering more advanced features such as stateful tasks that can share state with other tasks through a concept called Actors. Ray Serve also looks very intriguing. I’m looking forward to exploring further and learning more about what Ray can do!