You may have noticed that weights for convolutional and fully connected layers in a deep neural network (DNN) are initialized in a specific way. For example, the PyTorch code for initializing the weights for the ResNet networks (https://github.com/pytorch/vision/blob/master/torchvision/models/resnet.py) looks like this:

The weights are initialized using a normal distribution with zero mean and standard deviation that is a function of the filter kernel dimensions. This is done to ensure that the variance of the output of a network layer stays bounded within reasonable limits instead of vanishing or exploding i.e., becoming very large. This initialization method is described in detail in the following paper by Kaiming He et al. (https://arxiv.org/pdf/1502.01852.pdf)

The purpose of this post is to provide some additional explanation, mathematical proofs, simulations results and explore additional topics such as adding bias and using rectifiers other than ReLU such as tanh and sigmoid. The post is organized as follows:

He et al. start their analysis of the propagation of variance during the forward pass with the following blurb: 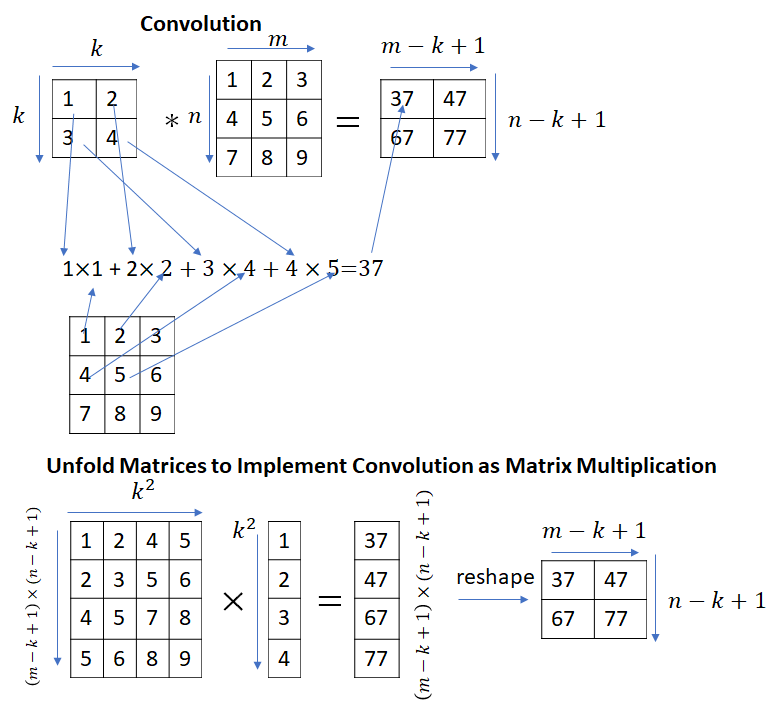 Strictly speaking, the calculation shown in the picture above implements correlation instead of convolution. Convolution can be implemented by simply flipping the kernel matrix along the rows and columns.

). It is easy to see how the technique shown here can be generalized to more than one channel. In this case, the filter kernel matrix will be flattened to a

vector. There are a few other parameters related to convolution operation such as stride length and padding. For more information, see Karpathy’s post and also my post. In our example, stride length = 1 and padding = 0.

CuDNN v1.0 released in Aug 2014 used matrix multiplications to implement convolutions. This is computationally efficient because highly optimized libraries implementing matrix operations are already available. However conversion to matrix multiplication is not the most efficient way to implement convolutions, there are better methods available – for example Fast Fourier Transform (FFT) and the Winograd transformation. Generally speaking, FFT is more efficient for larger filter sizes and Winograd for smaller filter sizes (

). These implementations have become available in successive releases of CuDNN. A timeline is shown below.

Consider one layer of a neural network with input 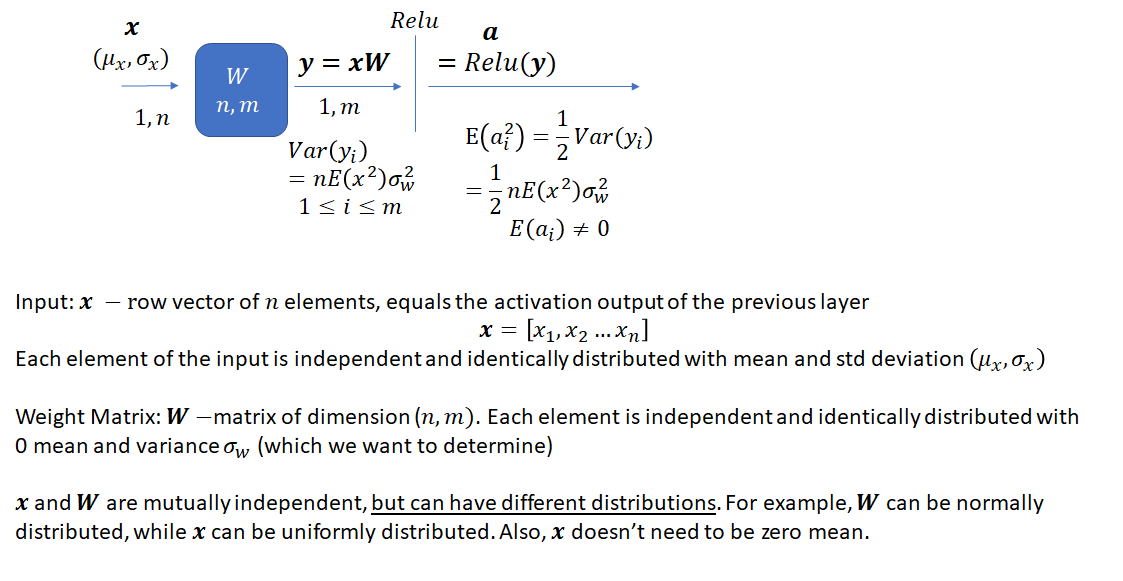 The task is to select an appropriate variance for the weights such that the variance of the network output stays bounded instead of vanishing or becoming excessively large, as the network gets deeper. As He et al. note, prior to the publication of their method, network weights were initialized using a Gaussian distribution with a fixed variance. With this approach, “deep” networks (networks with >8 layers) had difficulty converging. As an aside, it is interesting how “deep” neural networks have evolved in the last few years. The paper by He et al. was published in 2015 when a 8 layered network was considered deep. Now networks with 50 or even 100 layers are commonplace. He et al. noted that to avoid the vanishing/exploding gradient problem, the standard deviation of the weights must be a function of the filter dimensions and provided a theoretically sound mathematical framework (based on earlier work by Bengio and others). Their main conclusion can be summarized as follows: 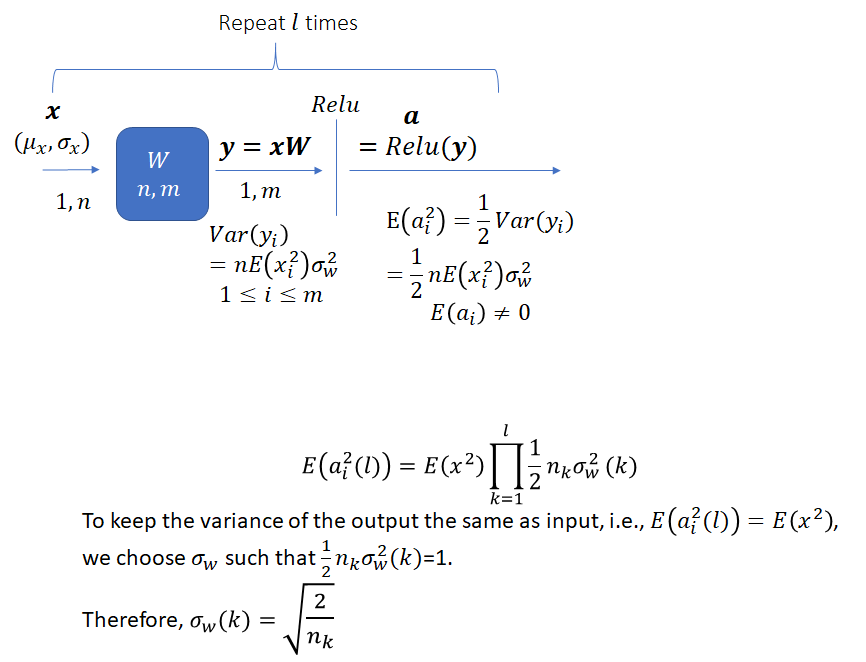 Let’s now consider the proof of the equations shown above and some simulation results.

Let’s first look at the proof for

is an element of the input vector

Let’s first look at the covariances 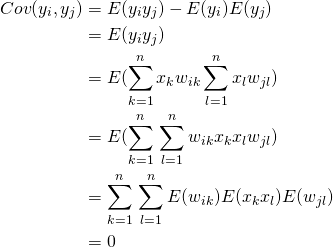 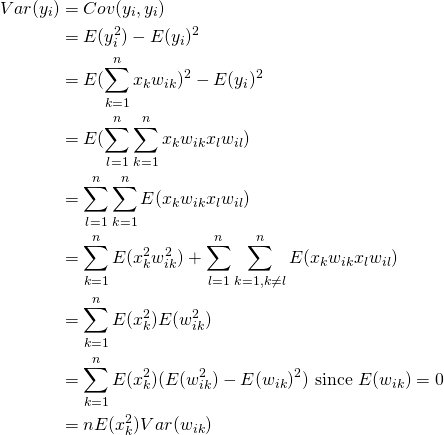 Here the last equality is due to the fact that

are identically distributed. Note that

need only be mutually independent, not identically distributed. To underscore this point, when we look at simulation results, we’ll draw

from a uniform distribution and

from a normal distribution.

Now, let’s look at the proof for

for the ReLU activation function. Note that

in general. However the cool part is that we don’t need the variance of

to propagate the recurrence to the next network layer.

is all we need. In section 4, we’ll consider a general activation function of the form

does not contribute to the Integral

is assumed to be symmetric around

now subtracting zero in the square we get:

This completes the proof. Now let’s look at some simulation results which will validate the results presented here. Our simulation framework consists of a simple 10 layered network consisting of alternating layers of

weight matrices. Input is a

vector where each element is drawn from a uniform distribution (0,1). Thus,

. We’ll run the forward pass 100,000 times with randomly generated input and weights and look at the distribution of the network output. In each trial, the weights are drawn from a normal distribution with a mean and variance chosen using the method described here. The python implementation is shown below.

After running the simulation for 100,000 trials,

This agrees with the formulas presented earlier.

now has an additional term – the variance of the bias. Let’s first look at the proof and then consider how to select

such that variance of the network output remains bounded. 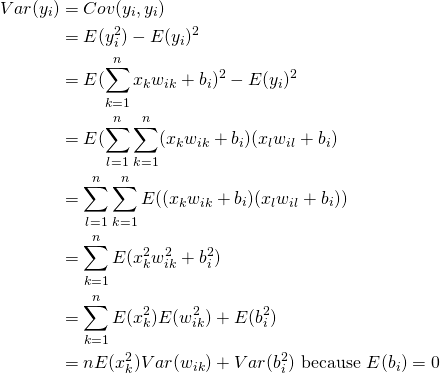 Choices for Weight and Bias Variances

We have the following recurrence equation for

in the presence of bias:

Expanding the recurrence, we get the following expression for

This expression approaches 1 as the number of layers increases. This means that the effect of the input on the output diminishes as the network gets deeper. This is not the outcome we want. Let’s consider another choice for the variances. If we pick

, then we get the following recurrence:

This is a lot better. Now the output depends directly on the input and remains bounded. This result is also borne out through simulations. We make the following change to the code:

We initialize the weights and bias as follows:

While running the network, we set use_bias = True

After running the simulation for 100,000 trials,

What about the Backward Pass?

In our analysis so far, we have only considered the forward pass. It turns out that the initialization method doesn’t need to be modified when the backward pass is taken into account. This is because propagating gradients through fully connected and convolutional layers during the backward pass also results in matrix multiplications and convolutions, with slight different dimensions. For more details, refer to He et al. paper. Also, one of my posts about back-propagation through convolutional layers  and this post are useful

So far, we have considered the ReLU activation function. ReLU has many desirable properties – it is mathematically simple, efficient to implement and leads to sparse activations. However, as shown in (https://arxiv.org/pdf/1602.05980.pdf), it is not too difficult to analyze the case for a more general activation function of the form

. The recurrence is given as:

Using Taylor series expansion, we can express many of the commonly used activation functions in the form

Both tanh and ReLU activations have the desirable property that

and thus our initialization method will ensure that the variance of the output will lie in the proper range. However this is not true for the sigmoid function – first,

which means that the dependence of the output on the input will decrease as the network gets deeper, second,

which makes the output gradient increase with each layer. I confirmed the first point in my simulation. Keeping the weight initialization method same as before (i.e, setting

is not a fatal flaw. It can be corrected by rescaling the sigmoid activation function and adding a bias.

is not a “universally optimal ” method. It is designed for the ReLU activation function, works quite well for the tanh activation and not so well for sigmoid.