The purpose of this post is to provide math proofs and clarify some implementation details in the recently introduced reinforcement learning method called “Trust Region Policy Optimization” (TRPO). Standard policy gradient methods try to find a policy that maximize expected rewards by solving the optimization problem:

This problem is solved by performing stochastic gradient ascent on the policy parameters. For more details, refer to the excellent lecture slides on “Advanced Policy Gradient Methods” as part of the Reinforcement Learning class at UC Berkeley. As a side note, I applaud the recent trend in academia to make class lecture notes at top universities available to everyone. This, accompanied by a similar trend in research to make code for new machine learning algorithms available is making it possible for anyone willing to put in the time and effort to master latest advances in machine learning. This spirit of openness will make the field accessible to talented minds all over the world who may lack the means to go to Stanford or Berkeley and help address the growing mismatch between the supply of and demand for machine learning practitioners.

The problem is that this approach offers no principled way to choose the right step size. If the step size is too big, the optimization may miss the minimum. If the step is too small, progress may be very slow. Standard machine learning methods address this problem by using automatic learning rate adjustment such as the Adam optimizer. However as illustrated in the lecture slides, the problem with the policy gradient methods is that small changes to the policy network parameters can cause unexpectedly large changes in the policy output (action probabilities).

TRPO offers a mathematically principled approach to this problem by re-framing the optimization problem as a constrained optimization whose solution is guaranteed to result in an improved policy. For details, refer to the lecture slides and the original TRPO paper. There are many PyTorch implementations of TRPO available. I’m using this one – https://github.com/Khrylx/PyTorch-RL. PyTorch is my favorite machine learning library. Someone I know recently said – “Looking at TensorFlow code gives me a headache, using PyTorch makes me smile”. I agree with that sentiment :-).

Parts of this code took me considerable effort to understand, particularly the proof of the fast method to calculate the Fisher vector product and its PyTorch implementation. The main purpose of this post is to offer explanations for the math and code so that it will be easier for you to follow. I’ll focus on the TRPO step and assume you already understand how to calculate value functions, compute advantages and other standard reinforcement learning techniques that are not specific to TRPO.

The constrained optimization problem solved in TRPO is stated as follows:

refers to the output of the network (at the

, representing a probability distribution over the action space.

, the subscript may be dropped in some places below as the dependence of the policy on the network parameters is implicit. Since

is fixed (at the end of iteration

), the only variable in the formula above is

. Therefore, while calculating derivatives using autograd, we must detach

from the computation graph. The summation is over the elements of the

The loss function is defined as

The gradient of this loss function wrt to the policy parameters

This gradient can be readily computed as the state-action sequence under the current policy is already available. The code to calculate the loss and gradient is shown below. We compute the policy gradient both using autograd and the formula above.

is the state action sequence generated by following

. The goal is to find the optimal new policy

that is guaranteed to decrease the loss function

(since KL distance is a distance, it can’t be lower than 0). Thus the first derivative of

Thus, our optimization problem reduces to:

To avoid getting lost in a sea of symbols, lets look at the dimensions of the vectors in the expression above.

is the gradient of the loss wrt the policy network parameters, and hence must have dimension equal to the number of parameters. Thus

being the parameter vector is also

is a scalar quantity. Similarly, the expression in the constraint has dimensions

As shown in appendix C of the TRPO paper, this problem is solved in two steps – first a search direction for

is computed and then a maximum distance along this direction is calculated such that the constraint is still satisfied. The direction can be calculated by applying the Lagrange multiplier technique (this is my own proof, the appendix in the TRPO paper just shows the final result). Denoting

, the Lagrange multiplier by

and the Lagrangian by

, the expression for the Lagrangian is given by

Thus, the direction along which we must search for the new policy parameters

is given by solving

. Now we must determine how far to move along this direction so that the constraint is satisfied. Let this distance be denoted by

. Substituting this in the expression for KL constraint, we get

gives the optimal step to update

. This mathematical principled method to compute the step size and direction is the major contribution of TRPO. Compare this with the ad hoc “learning rate schedule” typically used in training neural networks.

In practice, since both the loss function and the KL divergence are non-linear functions of the parameter vector (and thus depart from the linear/quadratic approximations used to compute the step) a line search is performed to find the largest fraction of the maximum step size that leads to a decrease in the loss function.

Thus, to compute the optimal step, we must do the following:

matrix where K is the total number of parameters in the policy net and easily be in the 10’s of thousands. To store this matrix and compute its inverse is very expensive. Note however that we are interested in the matrix-vector product

by itself. This product can be calculated using conjugate gradient techniques which require repeated calculations of

is a vector that changes every conjugate gradient iteration. This simplifies matters, however calculating the Hessian matrix itself is a problem for autograd because its automatic differentiation feature is designed to calculate the derivative of a scalar wrt a vector, whereas the Hessian matrix involves the derivative of a vector (the derivative of the loss wrt the policy parameters) wrt a vector (policy parameters). One could of course loop over each element of the vector (code shown below), however this would be very slow, and require a lot of storage to store a

is a large number (in the thousands).

Using a nice math trick, we can avoid calculating the full Hessian matrix to calculate the matrix-vector product. Here’s how this works. The

. Thus, the matrix vector product can be calculated by first calculating the first derivative of the KL distance wrt the network parameters and the product of this derivative vector with the input vector. This gives a scalar. We then calculate the derivative of this scalar quantity wrt the parameter vector which gives the desired matrix-vector product. This is called the “direct method” and the code is shown below:

Is this the best we can do? Turns out that by doing some math in advance, we can save some computation time.

From now on, we’ll refer

. Recall that the KL distance is a function of the action probability distribution output by the policy net whose parameters are specified by

represents the network output at iteration

and is a fixed quantity.

and applying the chain rule,

vector, as we would expect

and applying the product rule for derivatives,

The first term vanishes at

(refer to the Taylor series expansion of the KL distance above for an explanation). You may wonder why did

not vanish in equation 12 above. This is because we are not evaluating the expression at

is 2 while the first derivative at

Considering the second term in the equation above,

The transpose ensures that the dimensions of the product matches up.

and thus the product above has dimensions

Now let’s look at the middle term in this expression

which can be evaluated analytically.

Taking the first derivative and keeping in mind that

vector. Now taking the second derivative and noting that

Evaluating the expression above at

Since non-diagonal terms of this matrix are zero, it can be compactly expressed as a

vector, consisting of the non-zero diagonal elements. This explains the following code used in the computation of the KL divergence Hessian:

The process of calculating the full product

is shown in the slides below: 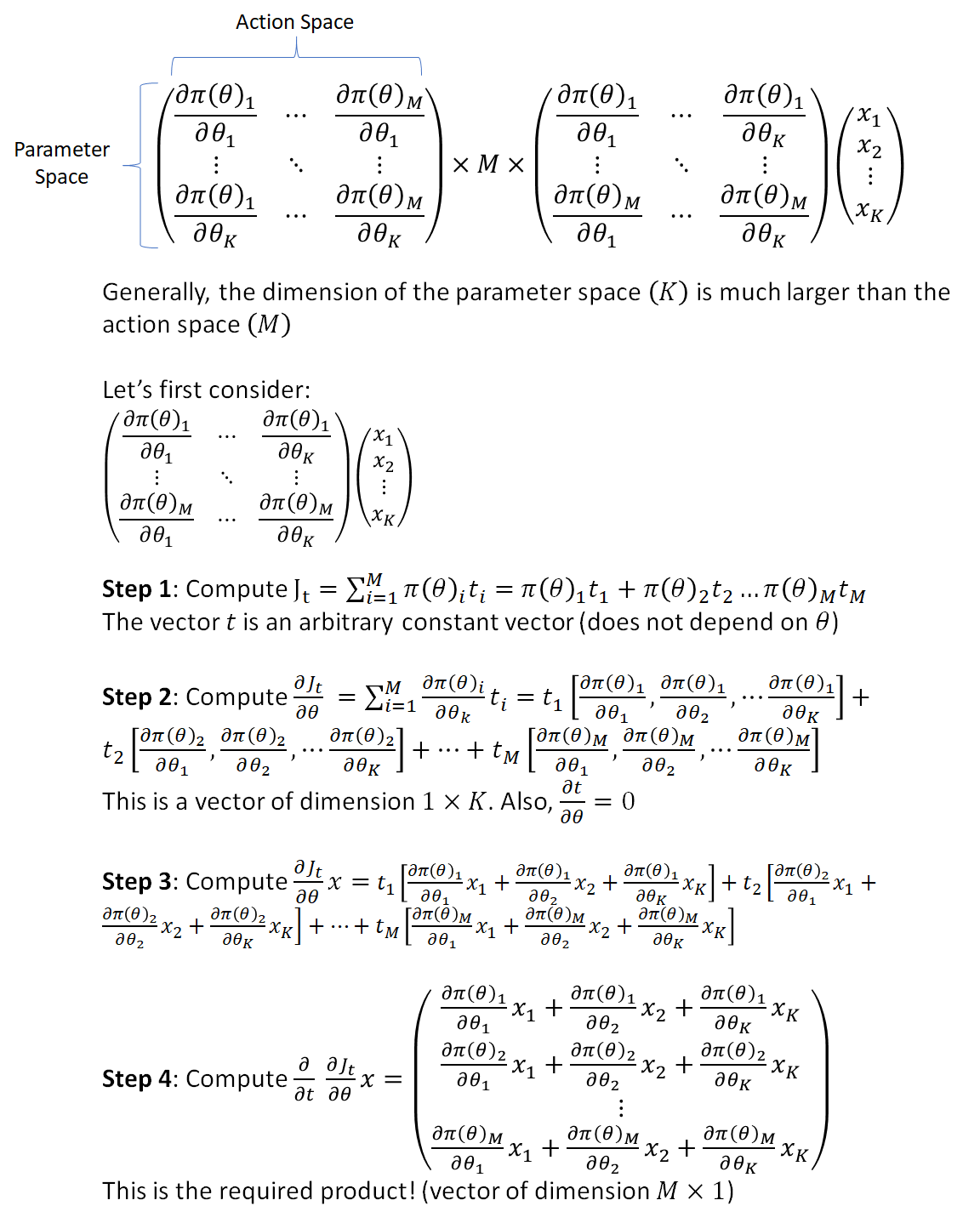 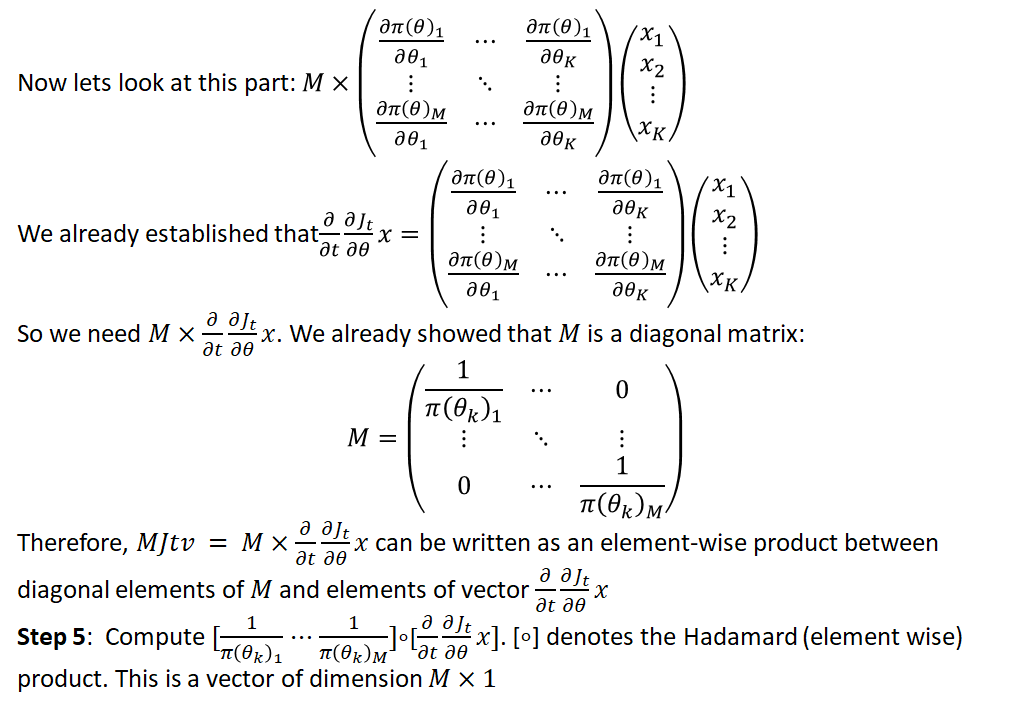 And the code with the steps marked is shown below:

This method turns out to be about 20% faster than the direct method. This is largely because we are calculating the derivatives of the actions with respect to the network parameters instead of with respect to the KL distance, which is a complex function of the actions. This is a good example of how doing some math in advance yields decent speed-ups over relying on software to do all the derivative calculation.

That’s it! Hope this post will help you with understanding the implementation of TRPO. I welcome your comments/feedback.